Intergalactic Missions Off The Table “For Now” 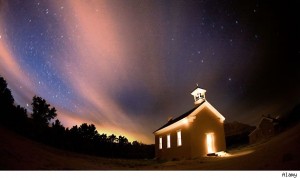 Mission enthusiast Niles Buchanan and his para-church group – “GO OUT” have been told by their Board of Directors to, “slow down, just a bit.”  When Buchanan presented his strategic plan for beyond-global missionary endeavors, the Board was pleased.  But inter-galactic planning should be tabled, “until our space-faring civilization extends beyond the reach of our own solar system.”

For Buchanan, the Board’s vision simply isn’t big enough.  “What part of ‘go out’ don’t they understand?  All this talk of redeeming the cosmos, and yet, they still limit their thinking to the Milky Way, which as we know is only a small speck of galactic dust when compared with the larger framework of the universe.”

Mr. Buchanan has been known to boldly carry the Word where no mission group has gone before.  In 2007, GO OUT purchased logo space to emblazon the words of John 3:16 on a European Space Agency probe set to explore the atmosphere of Neptune in 2016.   “The message is clear,” Niles explained to supporters on launch day, “The Gospel of Mark says we must preach the gospel to all of creation, and that is precisely what we plan to do.”

Steve Davenport, a member of GO OUT’s governance board, has a different opinion.  “Of course I love the vision Niles brings to the table, and I agree with him.   We have to go out.  But I also think that our tactics need to be indexed to the availability of space-travel technologies.  By running too far ahead of the curve, we may unrealistically raise expectations among our donors.  For now, we’ve set the goal of spreading the light of the gospel to our own Milky Way galaxy, our own ‘Jerusalem’ if you will.  When the time comes, we are prepared to expand that vision.”

Will the Board speed up the timetable?  Buchanan admits candidly, “We’re going to need more success in our own solar system.  At this point, none of our messaging has traveled beyond the orbital region of Jupiter, and I think that is weighing heavily on our board members.  They expected us to be out a lot farther at this point in the game.  But temporary setbacks shouldn’t limit our future vision.”

Buchanan claims that he has worked out a new strategy that his board will approve at the next annual meeting, which he claims to be “self-funding” because it is done is partnership with an asteroid mining operation set to launch in Fall 2014.  The details of the plan are not yet public, but other aspects of GO OUT’s ministry blueprint are about to be released.  “We see no reason to keep these tactics to ourselves.  We’d welcome some company out in the great unknown, as we herald the message.”

Mr. Buchanan will unveil those plans in his upcoming book, Light-Speed Gospel which, in his words, “changes everything you thought you knew about interplanetary church planting movements.”

If you'd like occasional updates on what's up in my family and ministry, new projects you can get involved with or new resources I'm developing, join the team! You can unsubscribe at any time, if you get sick of hearing from me. :-)
Click here to subscribe